'Invisible Catalans and the Nationalist Struggle for Recognition, 1886-2014' 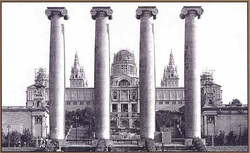 'Trajectories and functions of Catalan Nationalism since the 19th century'
Dr. Hans-Jurgen Puhle. Professor. Department of Political Science. J.W. Goethe-Universität Frankfurt am Main
The paper will try to summarize and compare the trajectories of Catalan Nationalism(s) since the late 19th century, between the poles of regionalism, federalism, ‘autonomism’ and separatism, identify the basic lines of its social background, interests, program and ideology, and look (period-wise) into some of its functions, achievements and limitations (for Catalonia, Spain and Europe; for the interests and the people; for opening up chances or making things difficult, etc.). Important aspects will also be the political strategies and priorities of, and the internal cleavages and divisions between the various groups and parties of Catalan Nationalism, and the changing conjunctures of their (possible or impossible) alliances, not only with ‘Spanish’ political forces, but also with one another. 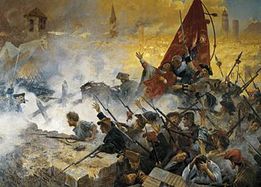 'The Origins of the Conundrum: Catalan Identity in the Age of Rising Spanish Nationalism, 1640-1848'
Dr. Stephen Jacobson. Professor. Dept. Contemporary History. Universitat Pompeu Fabra, Barcelona
Catalan "national" consciousness -- the shared sense that Catalans comprised a political community distinct from that of other Spaniards -- was on the decline throughout the eighteenth and the early nineteenth century in much the same way as Castilian "national" consciousness had been losing significance since the sixteenth century. By the Enlightenment, early modern Catalan patriotism -- so pronounced during the Reapers' War (1640-52) and the War of Spanish Succession (1701-1714) -- had become a memory of the past, held alive by a few pro-Habsburg nostalgic thinkers whose influence was greater in clerical than in secular circles. Following the War of Independence (1808-1813) and the liberal revolution in the 1830s, Spanish nationalism had triumphed in Catalonia as in other parts of the state.  In 1848, the nationalist bug swept across Europe but came to an abrupt halt at the Pyrenees. At the time, elite Catalans were integrated into Spain to a greater extent than any other period in history. Of course, the Spanish "Nation" -- like the British, French, or nascent Italian one -- was comprised of various peoples or "nations" of diverse languages, laws and customs. What is more, rising Spanish nationalism within Catalonia caused many to reflect on the political implications of what it meant to be "Catalan." The ethnic community -- the "nation" -- remained a vital concept, one that would prove quite usable in the ensuing decades. 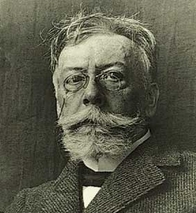 'Catalan culture and catalan nationalism in XIX century. Guimerà’s Renaixensa'
Dr. Ramon Bacardit. Specialist in Catalan Romanticism. Barcelona
The purpose of this paper is to show how Catalan cultural renaissance derive to a political ideology. First of all let’s take the word Renaixença, a word that means Renaissance or rebirth. How Catalan writers, artists or intellectuals in nineteenth century Catalonia used  to understand this concept? For them  something new was going on, something different from the past. But what kind of past? from their point of view, a past of decay and fall of the catalan literature and culture, if I may say it this way. They saw  the period of modern Age (from XVI to XVIII century) as a break in a tradition that begins in the Middle Age, with a flourishing nation and some memorable names to the medieval literature. They used to say that Catalan was a language of kings and popes, referring to the kings of Aragon and, of course, the Borja’s popes. In fact, what they really did was to build a cultural movement based on a semi-fictious story, a story about how they see themselves. Ángel Guimerà was a great figure in this process. He was the most popular playwright in Catalan in the nineteenth century and he leads a strong current of Catalanism from a very important literary and cultural  publication: La Renaixensa. He used to urge on his friends the importance of giving  a major political  sense to Catalanism.

'Political Parties in Catalan Nationalism, 1886-2012: Visible and Invisible Alternatives of Protagonism'
Dr. Enric Ucelay-Da Cal. Professor. Dept. Contemporary History. Principal Researcher of GRENS. Universitat Pompeu Fabra
Catalan nationalism, from 1886 and until 2012, was ideologically ambivalent, a vagueness expressed by voter-oriented parties, adapted to varying degrees, over time, of mass politics. For over a century, this equivocation, with the room for fluctuation it offered was the backbone of Catalan politics. As such, it permitted the existence of a regional political system within Spanish politics, both long-lasting and unusual, although less and less exceptional since the "Democratic Transition" of 1976-1978.  In this context, pro-independence sentiment was a clearly minority opinion, with extremely reduced electoral potential, if indeed any at all. However, in 2012, there has been a radical shift, as evinced by polls and the colorful display of mass protest in the streets.
Leaving the vagueness of ideology to one side, Catalan political scientists in the 1970s established a simple working model of party behavior, under the recognition of the primacy of electoral politics. They did so with a long-term perspective as far back as the late nineteenth century, which made it easy for historians to accept their paradigm, even though this rendered voter-oriented organization too visible, and ignored other political presences. Ambiguous, electoral “Catalanism” rendered invisible extremist “independentist” parties that were not electorally-oriented in their approach to political action, and scant capacity to garner votes. However, the recent shift in Catalan nationalism has inverted values: traditional ambiguous politics is now socially or politically unacceptable, and explicitness has become the new, seemingly correct style. The dominant call has become an obsession with plebiscitary democracy, and a distrust of “politicians”, and implicitly therefore parliaments. If the hypothesis of the end of “Catalanist” consensus in 2012 is correct, then the current pro-independence majority on the streets and in the nationalist press implies a break with classic, parliamentary voting. 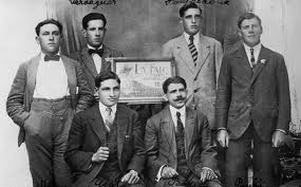 'The Cradle of Catalan Separatism: White-Collars in Barcelona during WWI'
Dr. Joan Esculies. Researcher. GRENS. Universitat Pompeu Fabra, Barcelona
This paper aims to examine the lower middle-classes involved in the creation and establishment of Catalan separatism in Barcelona during the First World War period. What professional and political positions were available to this group? Which did they choose and why? What were the central themes, symbols and politicians who represented them? By exploring how the lower middle-classes defined themselves politically and in relation with the urban landscape this paper pursues to shed light on a relevant, despite minoritarian, segment of the Catalan society. 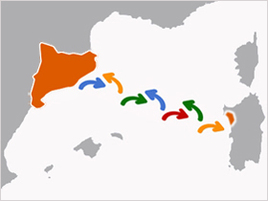 'The Invisible Homeland. The Catalan Speaking Minority in Sardinia and Catalan nationalism'
Dr. Marcel A. Farinelli. Researcher. GRENS. Universitat Pompeu Fabra, Barcelona
L'Alguer (Alghero in Italian, S'Alighera in Sardinian) is a coastal town in the Island of Sardinia. Founded by the powerful Genoese family of the Doria, it played quite an important role in the Western Mediterranean trade routes during the Middle Ages. In 1354 it felt in the hands of the Kingdom of Aragon, as one of the first strongholds in a long war to conquer the whole Island. The town was entirely evacuated by its Genoese-Sardinian inhabitants, and repopulated by Catalans settlers. During the golden age of the Kingdom of Aragon, the town was an important maritime and commercial center, closely linked to Barcelona, but also a fortress town in an Island periodically in revolt. L'Alguer was one of the most important port-cities of the Kingdom of Sardinia under Catalan rule. Nowadays its inhabitants speak dialectal forms of Catalan, influenced by Sardinian and Italian, despite the institutional link to the others parts of the Aragonese Crown broke down in the aftermath of the War of Spanish Succession. The existence of this Catalan speaking community aroused interest and curiosity between intellectuals and politicians, particularly the nationalists, from the Reinaxença until today. Currently l'Alguer is included in the map of the Països Catalans [Catalan speaking territories]. Despite this, in the small town doesn't exist a Catalan nationalist movement, only a minority have passed from a folkloric and cultural view to a more political interpretation of the relationship with the linguistic “homeland”. This paper aims to analyze the reasons of the invisibility of Catalonia as homeland seen (or unseen) from the Mediterranean city. 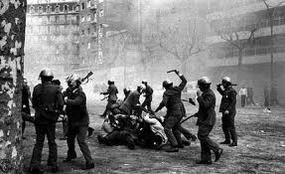 'Catalan Nationalism in the Recent Past'
Dr. Toni Raja. Professor. Study Abroad Program. Universitat Autonoma de Barcelona
This conference aims to explain how Catalan thinkers have built the idea of Nation applied to the Catalan case under Francisco Franco’s dictatorship (1936-1975), as well as during the Political Transition to Democracy (1975-1980) and the Autonomic years of the newly gained Catalan administration (1979-2013). So focusing on some authors also the Catalan context will have to be taken into account in order to be able to explain how the idea of Nation and Nationalism have changed in Catalonia. 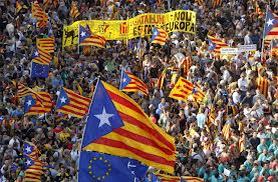 'From self-government to self-determination'
Dr. Ivan Serrano. Researcher. Dept. of Political Science. Universitat Oberta de Catalunya, Barcelona
After 30 years of democracy and devolution in Spain the possibility of independence has gained visibility in the Catalan political arena. This session will offer an overview of the last years focusing on three main elements. First, the state's response to the so-called Catalan question, from the proposal to reform the Statute of Autonomy to the ruling of the Constitutional Court in 2010. Second, the evolution of the nationalist discourse and the political debates around ideas such as the 'right to decide' or the possibility of a unilateral referendum. Third, the evolution of social attitudes towards independence, identity and electoral behaviour in Catalonia.